Joseph Akakpo, who ministers with the Association of Biblical Baptist Churches of Togo, is praising God for funds that will enable him to distribute school supplies to students attending one of his association's churches. 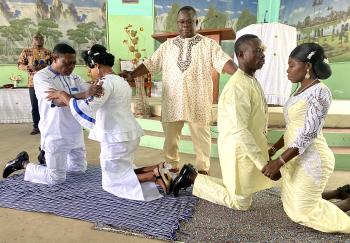 Joseph Akakpo, who ministers with the Association of Biblical Baptist Churches of Togo, is praising God for funds that will enable him to distribute school supplies to students attending one of his association’s churches. Three of those students also received bicycles so they can bike to their high school 4.8 away.

Joseph has also been serving at two of his association’s churches. When the pastors became ill, Joseph stepped in to fulfill pastoral ministries such as preaching, counseling, officiating weddings, leading baby dedications, and overseeing deacon meetings.

At other churches that partner with the Togo association, “termites are doing their job by destroying many of our church buildings built with wood,” Joseph says. His association’s church in Tagbolokope was one of them. But he is praising God for the provision of funds to rebuild that church. The new building will be “a better place of worship,” he says.

Funds are on their way so construction can hopefully begin in November, when the rain stops and the ground is dry. “We cannot build now because the ground is so wet due to lot of rain,” Joseph says.

The funds are enough for the association to help its other churches meet their needs as well. “Praise the Lord, Who provided,” Joseph says.