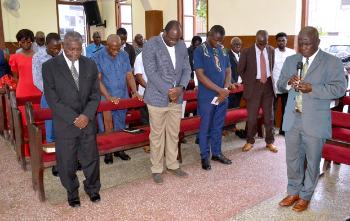 The Association of Fundamental Baptist Churches in Accra, Ghana, launched a new logo Sept. 4. The rebranding, the association says, conveys the importance of churches serving together and fellowshipping with each another.

The association, which started in 1946, includes about 100 churches.

The reveal of the new logo happened at a service held at Osu Christianborg Baptist Church in Accra. During that service, ministry leaders addressed the theme “Building a Resilient Front to Contend for the Faith.”

Among those taking part in the service was Aaron Mike Oquaye, former speaker of Ghana’s parliament and pastor of Charity Baptist Church, one of the association’s churches in the greater Accra region. He preached about guarding against divisions and selfishness in the Body of Christ.

“Serving God is not an independent mission, because there is no independent Heaven,” Aaron says. Churches are made up of people, and people have differences. But those “behaviors and attitudes should not sow divisions among Christians,” he says.

With the launch of the logo comes a new website, including a directory of churches in the association to help them fellowship with each other and serve God together.