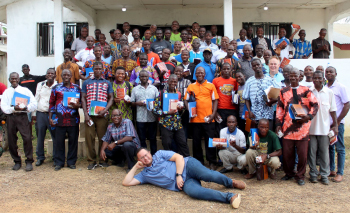 James Togba, pastor of Maranatha Baptist Church in Caldwell–New Georgia, Monrovia, Liberia, hosted the conference. He had asked Greg Linscott and Bill Brittain to speak. Greg is pastor of Calvary Baptist Church, Rochester, Minnesota, and a member of the GARBC Council of Eighteen. Bill is a missionary serving in Liberia with ABWE. They both addressed the theme “Except You Abide,” based on Jesus’ words in John 15:3–7.

Each day was packed with activities for the 704 people present.

A typical day began with a devotional session about 5 a.m., led by an AIBC pastor. A 9:30 a.m. teaching hour featured Greg Linscott, followed by a 10:45 a.m. worship service with Bill Brittain. Greg finished the day with a 7:00 p.m. service. In that service, a choir comprising members of AIBC churches led worship, singing in Liberian tribal languages including Kpelle, Bassa, and Mano. But one evening service was a youth service. Young people from several churches sang in small groups and in a choir and heard a sermon from Garmue Kwenah, former president of the AIBC youth conference.

Each preaching and teaching session was translated into Kpelle and Mano. 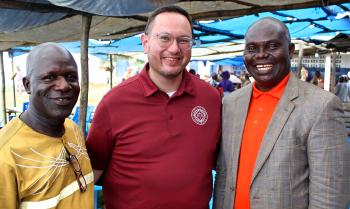 On the morning of Nov. 26, attendees formed a parade processional and walked through the community. The next morning, participants followed up that parade by evangelizing in the community. Through those efforts, 37 people made professions of faith.

“We are excited about what God is doing in our fellowship,” says Philemon Gwelikporlusohn, president of the African Fundamental Baptist Mission (AFBM) and pastor of Highland Hills Baptist Church in Bensonville, Monrovia, Liberia. “It is a blessing to be able to gather again, and to see our brothers from Faith Independent Baptist Association of Liberia joining us to plan for a future conference together.”

James Togba agrees, thankful that not only his association attended the conference but also Philemon’s association and the Faith Independent Baptist Association of Liberia (FIBA).

“As we are gathering again as an association,” James says, “bringing other new churches from Guinea and FIBA, it is a good sign that a council member is here from the USA too. God is bringing us together to accomplish His work.”

After the conference, ministry in Liberia continued with three days of pastoral training. Leaders offered instruction on Psalms, a workshop on preparing expository sermons, and a session on using healthcare as a vehicle for gospel engagement. The session on healthcare was especially appropriate for the setting, as the training took place in the AFBM Missionary Physician Assistants School in Grbargna, Bong County, Liberia. That site is a collaborative effort between the AFBM and ABWE and hosts a school to train missionary physician assistants in medicine and theology. The site also includes a medical clinic where patients can find physical and spiritual healthcare.

At the conclusion of the training event, the pastors each received an ecube to help them present the gospel and a copy of Quick Scripture Reference for Counseling by John Kruis. Twelve pastors also received a MacArthur Study Bible, donated by John MacArthur’s Grace to You broadcasting ministry, and five AFBM pastors also received motorcycles, paid for with funds the Brittains had raised.

Greg Linscott was moved by what he observed during his time in Liberia. “The people here were thrilled to be together. Many sacrifices were made for people to attend both the conference and training sessions. Many traveled long distances over rough roads in overcrowded vehicles. But the refreshment, encouragement, and joy they experienced was evident in their faces.

“God is producing fruit in Liberian churches, and I praise Him for it!”