Pastor to Rebuild Church in War-Torn Village of Congo

In Congo, war has destroyed the village of Mahanga. But a pastor wants to rebuild his church for members returning to the area. 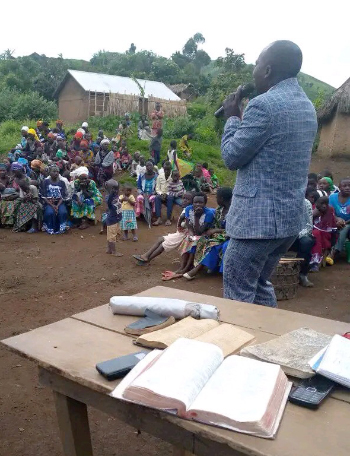 In Congo, war has destroyed the village of Mahanga. Bertin Mwema, president of the Community of Evangelical Baptist Churches of Congo, says everything is gone, including houses, churches, and even the lives of many people.

Mahanga had been occupied by rebels for many years. But recently “the government army fought them and defeated [them],” Bertin says. “Peace is already at place.”

“The government is calling everyone who fled this village to come back home,” Bertin says.

Bertin wants to rebuild his church that was in Mahanga. Members of that church, Mahanga Baptist Church, fled to refugee camps amid the fighting but are now returning to Mahanga.

“We want to rebuild our church again so that these people coming back to their original village can have a church to worship and praise the Lord,” Bertin says.

Although they still need finances to rebuild the church, members have been gathering construction materials.

To help provide financial grants for partnering ministries like the Community of Evangelical Baptist Churches of Congo, donate to Regular Baptist International.