Pastor John Nascimento prays that the president-elect in Guyana will not make missionary work more difficult. 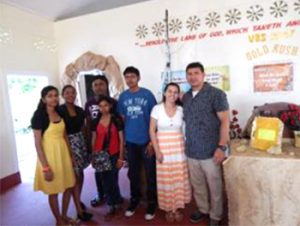 Pastor John Nascimento is chairman of the Association of Baptist Churches in Guyana. He sends the following ministry update.

President-elect Irfaan Ali, who is a Muslim, was sworn in two weeks ago in Guyana. I already dealt with Mr. Ali when he was the minister of housing, and he forbade me to buy land in a new location where the government was selling land. He said he didn’t want churches in the new location. He is a rude man and hates Christianity. I have been praying that he will not make missionary work in Guyana more difficult, especially in granting visas to missionaries, as it was in the past.

Churches have not been able to open, and the same for Hindu temples and mosques, since March. Since August 1, we have been able to meet again. Together with the services, we restarted pastoral studies with brothers Devon and Leon, who are called to the ministry. Pastor Renato and I have been teaching the two young men twice a week. They already are preaching on Sundays and lead in other ministries in the church. Continue to pray for these men.

"We are so glad to now meet in our completed place of worship," says Josiah Kennedy of Accra, ...more

Each fall, Central Baptist Theological Seminary holds a conference "designed to edify and equip believers in the areas of ministry and Christian ...more

Purpose:  To provide editorial skills in the production of materials that will help people come to Christ and grow in ...more

What is your definition of leadership development? What is your church's strategy for identifying potential leaders? How can your church align its ministries so every ...more