Back to School Project in Liberia

Calvary Baptist School System in Liberia had just completed the foundation for a classroom building when Ebola broke out, bringing the country to a standstill. Financial hardships are now making it difficult for the school to operate. 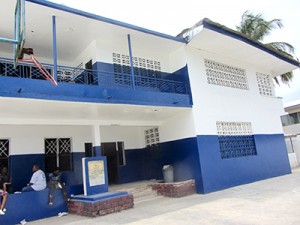 Larque Vaye is pastor of Calvary Baptist Church, Monrovia, Liberia, which operates Calvary Baptist School System. Due to the Ebola outbreak, the school will be difficult to run this year. He sends the following request for help.

Calvary Baptist School System, which has always assisted some parents in Calvary Baptist Church, is unable to help at this time due to its own economic crisis. Just before the Ebola outbreak, the school took a loan from the bank to build a 10-classroom building on the Suakoko mission. Little did we know that Ebola was going to break out and bring the entire country to a standstill after the foundation was completed. With a bank loan to pay, coupled with the inability of many parents to pay tuition and other fees for their kids at our school, it will be very difficult to operate the school this year unless we get external help.

It is in this light that I am soliciting help for needy parents and orphans who are unable to pay this year. This project will seek to support 20 students with tuition and other fees for the 2014–2015 academic year. The goal is $3,080.