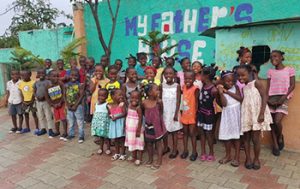 “This is a very daunting task for me,” says Jeff J. Adkisson of Bowed Hearts. “Yet I am very excited that the Lord found me able to take on the chore.”

The children’s overall health is good, though “winter bugs still come through,” Adkisson says. “Last week we had to take about 10 kids to the hospital to treat regular winter cold things. It cost us about 50–75 dollars per child to be seen and medicated on average.”

He adds, “It should also be known that the government in Haiti has let us know that we are not to take in anymore kids until we have more beds.” Adkisson is now eagerly waiting for the construction of a second orphanage, My Father’s House II, which will hold twice the capacity as the original orphanage. Adkisson asks people to pray that the construction “continues at an exceptional rate so that we may be able to take the little ones in that need it.”

Wonder World Funfest and Big Fish Bay are fully integrated, gospel-centered programs that weave the salvation message into each lesson. Choose one to order now. ...more

Leader in Africa Sends Thanks for Support

A pastor in Central Africa reflects on "the challenges, opportunities, and moments of celebration from ...more

Josiah Abedu-Kennedy is vice president of the Association of Fundamental Baptist Churches in Accra, Ghana. He sends the following ministry update. We are thanking the almighty ...more