Some displaced people from Goma, Congo, are now staying in the city of Sake after a volcano erupted May 22. 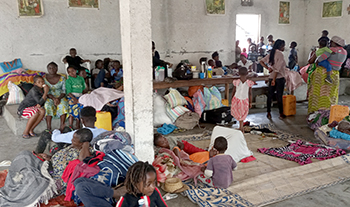 Some displaced people from Goma, Congo, are now staying in the city of Sake after a volcano erupted May 22. Their situation “is so catastrophic that we even lacked words to say,” says Pastor Safari Munyakazi, president of Community of Free Baptist Churches in Congo.

He visited all the Sake churches and schools, where people are staying. He wanted to not only meet the displaced people from Goma but also talk to the 57 members of his church who are taking refuge in those places and to see if they need help.

At a primary school, people from Goma are occupying the approximately 15 classrooms. “According to the director of this school, more than 2,500 people are staying there without assistance,” Munyakazi says. “One can read on their faces the total desolation.”

At a Baptist church, people staying there “are in a state of extreme suffering,” Munyakazi says. The church—with only one bathroom, no drinking water, and no food—is accommodating more than 1,500 displaced people. “According to the nurse of the health structure of this church, a few cases of cholera have already been reported,” Munyakazi says.

All the churches and schools in Sake are encountering the same situations. Some people even sleep outdoors because of the churches’ and schools’ lack of space.

“Continue to pray for us and for these displaced people, who are suffering, so that they can regain hope for normal life,” Munyakazi says.

Next post "Catastrophic" Situation for Displaced People in Congo