A church has been planted in Liberia after 100 people professed Christ as Savior during an evangelism endeavor. 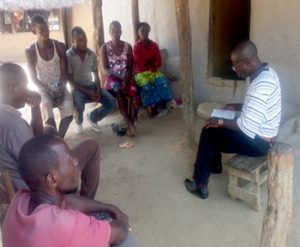 I led a team of Bible students and some local pastors to conduct a week of street meetings and open-air preaching in several villages of Monsterrado and Margibi County of Liberia. The gospel was preached in boldness. Many people saw their emptiness and broke into tears after they clearly heard and understood the nature of the gospel of grace alone for salvation, and over 100 people made professions of faith in Jesus Christ as their Lord and Savior. Praise the Lord!

The team visited seven villages and established a new church (Zannah Town Baptist Fellowship). Uranus C. Nixon and his wife, Janet, will serve as pastor and wife of the newly established church. They have actually been praying for the Lord’s direction in the matter of where to pastor after his graduation from the Bible institute. Uranus told me after the meetings in Zannah Town that he saw many answers of their prayers that proved to him that indeed the Lord is calling him to pastor the new establishment. He says the people in that town are hungry for the Word of God.

Next post Church Planted in Liberia with 100 New Believers

NEWS FROM REGULAR BAPTIST MINISTRIES Mike Hess, GARBC National Representative I’d imagine that most reading this are enthusiastically and optimistically welcoming in the year 2021. While the ...more