Devasahayam Chatla with the Lord

Devasahayam Chatla of Andhra Pradesh, India, died Sept. 12. He had ministered with Baptist India Ministries since the early 1980s. 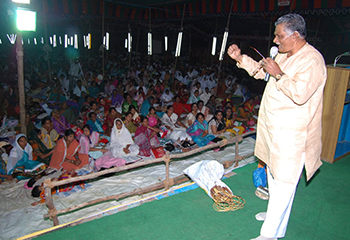 Devasahayam Chatla, a leader among pastors in southeast India, died Sept. 12 at age 72. He had ministered with Baptist India Ministries since the 1980s.

Chatla professed Christ as Savior at age 6. “I learned to spend my days in the church like boy Samuel,” Chatla has said. “There I grew up in prayerful atmosphere.”

When Chatla began college, he intended to study medicine, but God had other plans for him. Attending Andhra Christian Theological College, Chatla earned a bachelor’s degree in divinity and masters’ degrees in theology and philosophy. He also received an honorary PhD from Logos Evangelical Seminary in Japan.

In 1980 Chatla and his wife, Suguna, moved to Nidumolu, a village in Andhra Pradesh. They began reaching their neighbors and community with the gospel, and God greatly blessed the couple’s faithfulness. 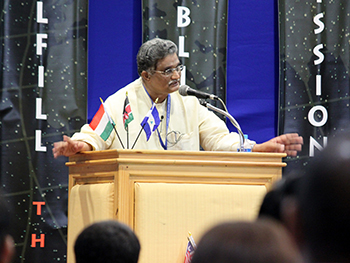 Devasahayam Chatla speaks at Regular Baptist International’s All Partners Conference in Bangkok in 2009.

Devasahayam Chatla “was highly respected for his vision and his compassion,” says Chris Hindal, former director of Regular Baptist International.

“Winning souls for Christ and planting churches was high on his priority list. In the formative years of the Biblical Baptist Partnership International, Dr. Chatla was asked to serve on the first Council of Eight. Through the years he remained active in the partnership and faithfully attended the conferences.

“The opportunities I had to spend time in casual conversation with Dr. Chatla deepened my love and respect for him. He was not content to have a list of partners. He longed for more cooperation and expansion. I will greatly miss him.”

Previous post Ministries to Students and Women in Togo

You Cannot Help but Worship

You may be either an atheist, an agnostic, a Muslim, a Jew, a Christian, a Wiccan, a Buddhist, a Hindu, or simply an individual who ...more

4 Activities To Fight the Wintertime Blahs

The Why Factor of VBS

RBP VBS emphasizes the "why factor," which teaches kids why they should believe what they are being ...more