A team of former missionaries from the United States led two weeks of seminars at churches in Liberia. 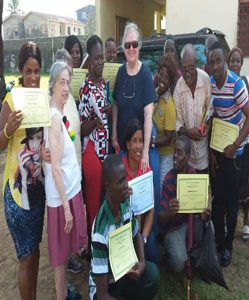 In June, we received a delegation from the United States of America. Those on the team included Elizabeth Jones, Sherry Segal, Sue Benson, and Pastor Eric Wohner, all former missionaries of Baptist Mid-Missions and Sudan Interior Mission. They arrived on June 7 and, for two weeks, conducted seminars for churches in Bong, Margibi, and Montserrado counties. They conducted seminars for pastors, school administrators and teachers, and women at Jake Memorial Baptist College and Grace Baptist Church.

Severe flooding in the Midland area last week caused significant damage to nearly 30 of the church family’s homes, with some homes declared a total ...more

Kids Given Opportunity to Bless Orphans This Summer

An association of churches in Congo thanks Regular Baptist International for sending Bibles, enabling church members to read the Word of God at home. ...more

Churches Carry on . . . with Caution

As states loosen coronavirus restrictions, churches are taking steps to reopen. But those steps come with plenty of ...more