Haiti Demonstrates Its Need of Jesus

Chris Hindal recently visited Haiti, a nation that he says is experiencing a bump in the road but is a field "white for harvest." 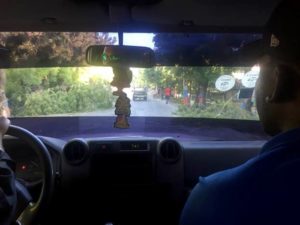 Haiti is experiencing a bump in the road, but this nation is a field “white for harvest” (John 4:35).

Deb and I arrived in Port-au-Prince on Friday, July 6 and departed on Thursday, July 12. Pastor Prédestin Pierre Hérard, president of the Association of Evangelical Baptist Churches of Haiti, had scheduled me to preach on Sunday; however, due to protestors in the streets, it was not possible to move through the city, so the service was canceled.

The protests also affected plans for the next two days. I had intended to visit ministries on Monday, but that didn’t happen either. The next day, the Association of Evangelical Baptist Churches of Haiti was supposed to meet for its annual meeting, and I had been scheduled to speak. That conference will have to be rescheduled. While Deb and I were disappointed, we knew God had other plans.

The opposition party to the current administration had staged these protests in response to fuel prices. Haiti receives subsidies through the International Monetary Fund. Part of those funds are used to subsidize fuel prices, keeping prices down in this poorest country in the Western hemisphere. In reorganizing the national budget, the administration decided to direct more funds to social programs and infrastructure. That decision, though announced back in January, decreased the subsidy to fuel, and consequently, fuel prices went up dramatically. The opposition party pounced on the increase, spinning its own version of the issue and rallying the people to protest the president and prime minister. Gang leaders have been involved and outsiders have been hired to help organize the protest efforts throughout the country, but most of the Haitian people have just stayed home, waiting for the protests to cease.

This kind of thing is almost expected from time to time in many developing countries, as the people have few means of voicing their opinions.

Safe from the protests, Deb and I stayed at the Mission of Hope headquarters on the outskirts of Port-au-Prince. Mission of Hope has an incredible reputation of compassion and assistance to the Haitian people in the name of Jesus. Haitians themselves lead this organization both on campus and in surrounding villages. Mission of Hope and its affiliates were not in danger and were not targets of the protests. I was able to preach on Sunday to a North American church, made up of Mission of Hope staff and 53 interns who meet on campus, and I spoke to the interns during their weekly Tuesday evening meeting.

Pray for the Christians of Haiti, that the light of the gospel will shine brightly. Also pray for the Haitian people to see through the nonsense of irrational behavior and realize the only answer to the emptiness of life is to become a follower of Jesus, first in their hearts and then in their lives.

Posted in Follow The Director, IPFBM, Ministry Highlights on July 18, 2018.