On a new leg of their three-week trip through East Africa, Chris and Deb Hindal visited an association of churches in Uganda.

On a new leg of their three-week trip through East Africa, Chris and Deb Hindal visited an association of churches in Uganda. Chris, director of Regular Baptist International, and his wife, Deb, are meeting with seven partnering associations in six East African countries. They previously stopped in Nairobi, Kenya, Sept. 23 and Bungoma, Kenya, Sept. 25. 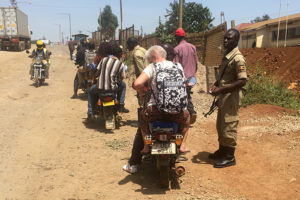 On Sept. 28, after a 45-minute ride from Bungoma, Kenya, Chris and Deb walked across the border into Uganda. Their Kenyan host, Pastor Cyrus Wanyonyi, president of Good Soil Baptist Churches International, introduced the couple to their new host, Pastor Joshua Masaba, president of the Eastern Uganda Baptist Association. The Hindals’ first stop was the immigration office, but it’s located across a long bridge in no-man’s-land. Suddenly three motorcycles stopped. The drivers put the couple’s luggage on the seats, and Deb—for the first time in her life—was straddled onto the back of a motorcycle. Weaving through slow-moving semitrucks, the drivers delivered the Hindals directly in front of the immigration office. 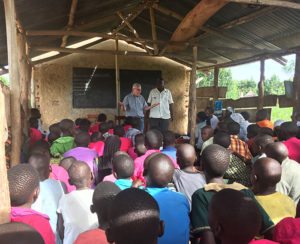 Meeting Joshua Masaba at the border was the first time Chris had spoken with him face-to-face. The Eastern Uganda Baptist Association joined Regular Baptist International in 2013, and though Chris and Joshua have communicated since that time—especially when Regular Baptist International shared funds with the association during a drought—Chris was privileged to finally meet Joshua in person.

The afternoon they arrived in Uganda, Chris and Deb visited Bugodo Baptist School and Orphanage, sponsored by one of the association’s 60 churches. The 144 students (38 of whom are orphans) gathered in their open-sided dirt-floor structure to present a program of recitations, songs, and dances. Later the Hindals peeked in the dormitories and saw that the children sleep on mats on the floor.

The next morning Chris and Deb accompanied Joshua on a tour of Kayango Baptist Church, as well as its orphanage and school. The orphanage cares for 140 children: 74 who are without both parents, and 66 who don’t have fathers.

Before the students began attending school at the orphanage, Kayango Baptist Church had started a different school. But that school struggled financially. Eventually the government took control of it and turned it into a public school. But since most of the orphans have no financial support, they cannot attend the public school. To educate the orphans, Kayango Baptist Church started a new school at the orphanage; the student body consists of 137 boys and 133 girls. Even though they are able to attend school, the children still need financial support. Pastor Joshua says that $200 a month of support for the orphanage would make a huge difference in providing food and educational resources for these children. 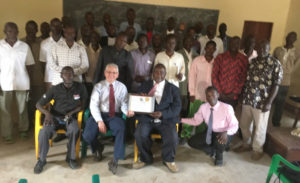 After visiting Kayango Baptist Church’s orphanage and school, Chris and Deb attended a one-day conference for church leaders. About half of the 80 attendees were pastors. The conference included not only times of teaching but also congregational worship and music presentations by two choirs. Chris says the Ugandan people worship with feeling and demonstration.

With the help of translators, Chris and Deb both spoke during the conference. Chris spoke to the entire group for five and a half hours on the subject of the church, and, during an afternoon breakout session, Deb spoke to the ladies about graciousness. The next morning, Chris spoke again during the host church’s morning worship service without any time constraints. After the church service, Joshua and his dear wife, Grace, hosted the Hindals. Then the next morning the Hindals headed for the next leg of their trip: Rwanda.

Moving Forward as a Fellowship

Listen as interim GARBC National Representative David Strope describes how we are moving forward as a ...more

Pastors and deacons from Indiana's Crossroads Fellowship churches attended a leadership summit focused on the ministry of ...more