Chris and Deb Hindal are visiting pastors and wives, churches, and seminary students and leaders in Peru.

Trujillo, Peru, a city of one million people, is situated on the coast of the Pacific Ocean, a one-hour flight north of Lima, the capital of Peru. Chris Hindal, director of Regular Baptist International, and his wife, Deb, landed in Trujillo on Thursday, May 16. Until May 30 they will be visiting partnering associations and prospective associations, including pastors and wives, individual churches, and seminary students and leaders. 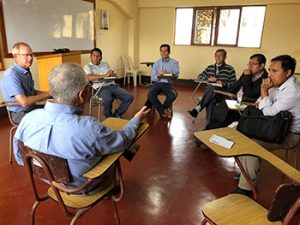 The Hindals first visited a fellowship of Baptist pastors representing 35 churches. The fellowship is the fruit of Baptist Mid-Missions efforts over the last 50 years and is part of the International Partnership of Fundamental Baptist Ministries. The pastors meet monthly and actively support the Baptist seminary of Peru.

Chris scheduled a meeting with the fellowship’s officers. Many of the pastors are bivocational, and several churches do not have their own buildings. The churches use Regular Baptist Press Sunday School curriculum that has been published in Spanish by Editorial Bautista Independiente, an arm of BMM. The fellowship of churches is short on pastors.

The seminary in Peru is currently training 54 students. Chris spoke in the seminary’s chapel and shared via PowerPoint the worldwide ministries of the IPFBM. He also met with the seminary’s administrative team, discussing options for the faculty to pursue masters degrees in an effort for the school to secure accreditation. He also offered to assist in acquiring some key books for the library.

Veteran missionaries Stephen and Evelyn Stilwell hosted the Hindals. The Stilwells are officially retired, but no one would know that based on their busy ministry. Stephen has developed a top-notch camp about one hour south of Trujillo. He 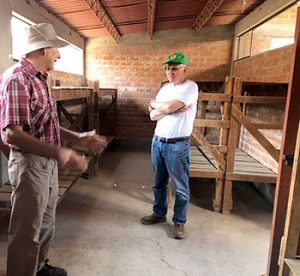 designed the master plan as well as each building. He gave the Hindals a tour of the grounds, including the chapel, dining hall, boys’ and girls’ dorms, speakers’ cabins, sports center, snack shack, swimming pools, children’s playgrounds, and sports fields. Churches and individuals in the USA contributed money and sent work teams to help build this wonderful camp. Every camp season, about 50 campers profess Christ as Savior.

On Sunday morning Chris spoke at Maranatha Baptist Church, pastored by John Jairo, who also teaches at the seminary. He believes the Lord is leading him to eventually do missionary work in Bogotá, Colombia. On Sunday evening Chris spoke on the other side of 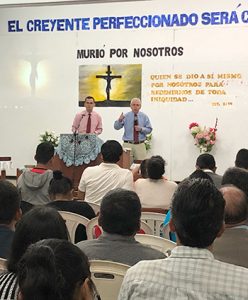 Trujillo at Bethlehem Baptist Church, pastored by David Rodriquez. Chris and Deb were blessed as both congregations showed genuine interest in the Lord’s work around the globe.