Jesse Quapourlee of Liberia with the Lord 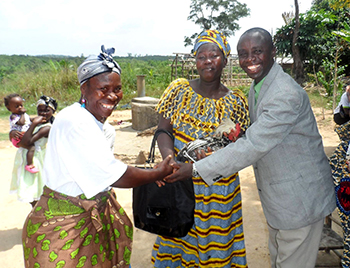 Jesse Quapourlee and his wife, Comfort (center), greet a woman at a village in Liberia.

Jesse was the founder and pastor of New Testament Baptist Church in Liberia, which fellowships with the African Fundamental Baptist Mission, Inc., in Monrovia, Liberia.

In addition to ministering as a pastor, Jesse served on the Council of Eight for Regular Baptist International’s Biblical Baptist Partnership International. Since 2016 he also preached twice a week on a radio program that reaches 14 of Liberia’s 15 counties.

“Jesse was a special servant of the Lord,” says Chris Hindal, former director of Regular Baptist International. “He had vision and passion for the lost.”

Jesse is survived by his wife of 25 years, Comfort, and their four children.