Campers at Duaita Youth Camp in Liberia can now sleep comfortably, thanks to donations made at an International Ministries luncheon at the 2014 GARBC Conference. 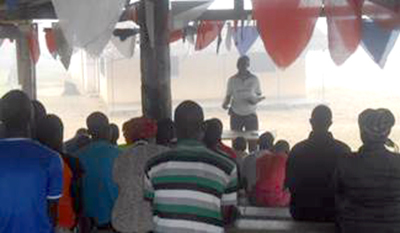 Thomas Vahwulu is director of Duaita Youth Camp in Liberia, a ministry of the African Fundamental Baptist Mission. Recently the camp, established in the 1970s, realized its facilities needed renovating. “In view of the very bad state of disrepair, our camp site is proving to be dangerous and is becoming increasingly untenable for ministry,” Vahwulu said in 2013.

Duaita Youth Camp usually holds two camps each year. However, last year it was forced to cancel its midyear camp because of the Ebola outbreak. The camp is returning to its regular schedule “now that the risk of the virus has greatly subsided and people are now free to move around and gather in large groups.” Sixty-five youth attended the camp in January. Of those, 16 came to know the Lord, and 27 recommitted their lives to Him.

Next post Sunday School Started in Dangerous Location in India

A ministry that partners with Regular Baptist International sends a plea for prayer after a tragedy. The name of the ministry is being withheld due ...more