Minister in India Recovering After Being Beaten

Prasad Sakile, a pastor with the New Life Regular Baptist Society of Andhra Pradesh, India, asks prayer for a minister in his church after an incident of persecution. 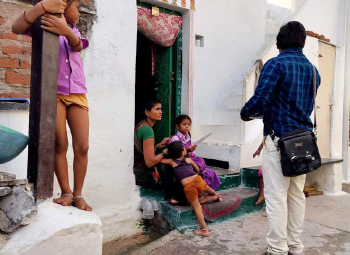 “With a painful heart,” Prasad Sakile, a pastor with the New Life Regular Baptist Society of Andhra Pradesh, India, asks prayer for a minister in his church after an incident of persecution.

While sharing the gospel door-to-door, a youth coordinator at Prasad’s church, Ruben, was beaten by Hindu radicals. The group beat him with sticks and burned the tracts he had been carrying.

“By the grace of God,” Ruben was not seriously injured, Prasad says.

Prasad and his father visited Ruben in the hospital, where they prayed together. Doctors have recommended that he spend one month on bedrest. Prasad will be covering Ruben’s hospital expenses, as well as his home expenses for two months.

Prasad says Ruben is “a dedicated person with a vision to preach the gospel to the unreached.”

Ruben was born into a Hindu family but professed faith in Christ, was baptized, and desired to serve the Lord in ministry. He attended Bible college and earned a master of divinity degree. He is now overseeing three home gatherings of believers every Sunday, is involved in Sunday School ministry, and shares the gospel door-to-door.

Please pray for Ruben’s health, as well as comfort for his wife and two young children, Prasad says.

Please also pray, Prasad adds, “for major changes in Hindu government, leadership, greed, and the list goes on and on. Praise the Lord our Savior never changes, and we have victory because of our Lord.”

Next post Minister in India Recovering After Being Beaten

The California Association of Regular Baptist Churches met for its Annual Bible Conference May 9–11 at Orchard Baptist ...more

Christian Golf Professionals heard from Ken Floyd, author of "Men at Play," in an online golf chapel. He challenged the men and women to use ...more

David Strope's family joins him as he receives an honorary DDiv from Faith Baptist Bible College and Theological Seminary. ANKENY, Iowa—During its commencement ceremony May ...more

Year-End Ceremony: Do the Unexpected!

In your Kids4Truth Clubs year-end ceremony, do regular activities--like presenting awards, singing, reciting--but tweak them with something unexpected. Here are ideas other churches have ...more