A leader in Myanmar who partners with Regular Baptist International asks for prayer after the military's takeover of the government. 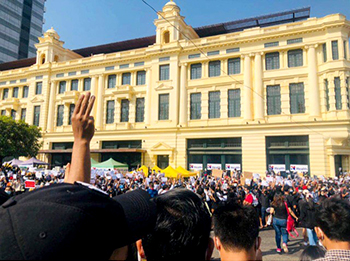 A leader in Myanmar who partners with Regular Baptist International asks for prayer after the military’s takeover of the government.

Myanmar has been ruled by the National League for Democracy and the military for the past five years, this ministry leader notes. In an election on Nov. 8, the NLD won by a landslide, but some people disagreed with the result and complained by demonstrating.

“As a result of the protest and demonstration, the military seized on Feb. 1, and Myanmar is under military dictatorship again,” the ministry leader says. “The government servants dropped their works to participate in demonstration, Civil Disobedience Movement, and there is a thick darkness in Myanmar.

“So far there’s no positive response from the dictator, and we need more prayer for a dramatic change in Myanmar. Let us pray for the safety and change of Myanmar—that God will open the door for sharing the gospel to the unreached people [so] that the church of Christ will grow.”

Next post Ministry Leader in Myanmar Requests Prayer amid Coup

Previous post Productive Month of Ministry for Association in India