Two weeks ago Prasad Sakile was evangelizing door-to-door when people attacked him and his ministry team. 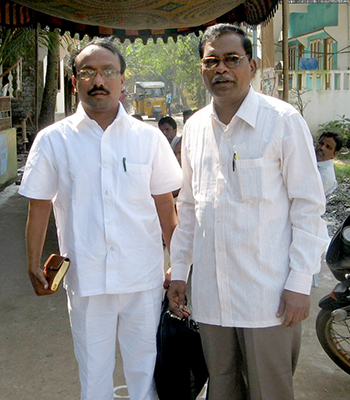 Prasad Sakile and his father minister in India.

Prasad Sakile is a pastor with the New Life Regular Baptist Society in Andhra Pradesh, India. Two weeks ago he and a team evangelized door-to-door in Addinkivarilanka village. They preached on a street without anyone harassing them. But when they went to a different street, a group of people yelled at them and beat them with sticks.

One team member suffered a broken hand, and Prasad fell when he was beat on the head with a stick. The attackers then fled.

Prasad went to the hospital. Scans of his brain and eyes showed no damage from the attack, but he is now experiencing severe headaches and decreased vision. Doctors have suggested that he get a microscan of the eye nerves and brain nerves, a test available in Hyderabad, 700 km (435 miles) from his village. But such testing, in addition to being too far away, is “too expensive according to my financial situation,” Prasad says. So he is “waiting for Lord’s providing and mercy.”

Christians in India have been facing increasing persecution from Hindu radical groups, Prasad says. In some areas, Christians aren’t allowed to preach the gospel. They get scolded, are sometimes beaten, and find their vehicles destroyed. Police officers do not listen to complaints of attacks, because the government is based on the Hindu religion, Prasad explains. The government’s “main aim is to change the entire country into Hindu religion country,” he says.

However, God is already at work in the situation, Prasad says. On a Sunday following the attack, a “gathering service was conducted safely” in the place where his team was beaten. “Praise the Lord for His grace on that people group,” Prasad says. He is “eagerly waiting to visit that place” again to share the gospel.

“Please continue to pray for me and my team members for quick recovery and also all our financial needs for hospitalization,” Prasad says. He “fully depends on our Lord” (“our provider and caretaker,” Prasad says) to provide. “He [will] never forsake His followers.”

Previous post Baptisms in the Democratic Republic of the Congo