Needs Are Great after Volcano in Congo

Living conditions are difficult for many in Congo following the eruption of a volcano May 22. 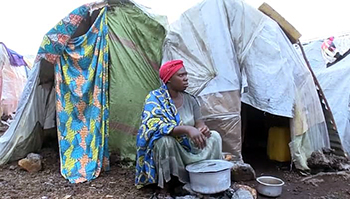 Living conditions are difficult for many in Congo following the eruption of a volcano May 22.

Pastor Safari Munyakazi, president of the Community of Free Baptist Churches in Congo, reports that 122 families from his churches lost their homes and belongings.

Those who lost their homes now live in schools or tents built with fabric.

“Continue to pray for us so that we can find the means to come to their aid,” Munyakazi says.

Another pastor, Bertin Mwema, also reports that members of his church have lost their homes. Mwema is president of the Community of Evangelical Baptist Churches of Congo.

Church members whose homes were spared damage from the volcano are now hosting displaced families. But neither the hosts nor their guests have money to buy food, so starvation will be a problem, Mwema says. Mwema’s family is housing eight children who became separated from their parents.

“The needs are great,” he says.

The two children, Salomo, age 8, and Ortance, age 5, had run away in fear with six other children with the volcano erupted. Six of the children were quickly found, but these two remained missing until recently. The Red Cross had been taking care of these children for about a month until its staff determined where they live and returned them to the orphanage.

“We thank God for having made this possible,” Fidele says. “We thank you too for the prayers.”

Next post Needs Are Great after Volcano in Congo