Ministry endeavors have been exciting so far this year for Pastor G. Larque Vaye of Liberia. 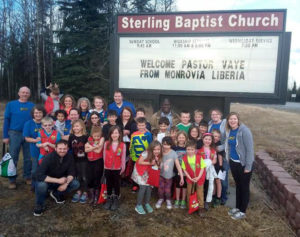 Greetings from warm Sioux Falls, South Dakota. For the past two months, since my arrival in the U.S. in March, I have been experiencing changes in the weather—from winter to spring. For the first time coming to the U.S. in winter, it was really COLD for me, especially in Ohio, where we were for two weeks. Thanks to all of you who have been praying for me.

The year 2018 began on an exciting footing for the church, with everyone looking forward to a good year as we continue the building of the new church edifice. Work on the church construction is making tremendous progress with the completion of the downstairs auditorium walls and the planting of the second floor pillars, as work continues to cast the last concrete floor before the roofing.

Severe flooding in the Midland area last week caused significant damage to nearly 30 of the church family’s homes, with some homes declared a total ...more

Kids Given Opportunity to Bless Orphans This Summer

An association of churches in Congo thanks Regular Baptist International for sending Bibles, enabling church members to read the Word of God at home. ...more

Churches Carry on . . . with Caution

As states loosen coronavirus restrictions, churches are taking steps to reopen. But those steps come with plenty of ...more