"Once again we are facing floods due to heavy rains," says Prasad Sakile, a pastor with the New Life Regular Baptist Society in Andhra Pradesh, India. 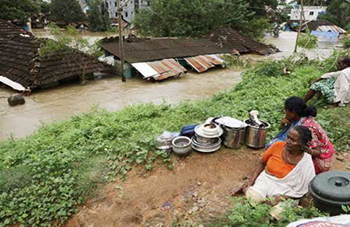 “Once again we are facing floods due to heavy rains,” says Prasad Sakile, a pastor with the New Life Regular Baptist Society in Andhra Pradesh, India.

The area where he ministers consists of 15 fishing villages in remote locations along the Indian Ocean and several rivers. Every year those villages face flooding, making travel difficult for the fishermen and for Prasad.

Prasad has been ministering in those villages for 20 years. The people there “are rock praisers,” he says. They think that worshiping rocks will “get rid of their problems,” he explains.

Prasad has established three small gathering centers in huts to hold worship services, but he would like to build a permanent church in that area. “We are praying for the Lord’s guidance for this particular need,” he says.

He is working with a team of believers to preach the gospel to these people, along with giving them food and drinking water. Please pray for these “hopeless people groups,” he says.

Prasad would like to purchase a motorbike to travel to unreached areas, like this community of villages, where he preaches the gospel.

You Cannot Help but Worship

You may be either an atheist, an agnostic, a Muslim, a Jew, a Christian, a Wiccan, a Buddhist, a Hindu, or simply an individual who ...more

4 Activities To Fight the Wintertime Blahs

The Why Factor of VBS

RBP VBS emphasizes the "why factor," which teaches kids why they should believe what they are being ...more