Bible teachings aired on a radio station have reached thousands of people in Liberia. 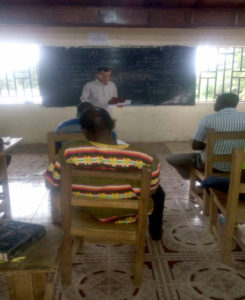 Jesse Quapourlee is a pastor with the African Fundamental Baptist Mission, Inc., in Monrovia, Liberia, West Africa. He sends the following letter.

Our Bible teachings by radio have drawn the attention of thousands of listeners in five counties of Liberia. I am now serving as a counselor to many people who have listened to the teachings and believed in Christ as their Savior. Five married couples who have been separated for up to three years because of marital problems have been reconciled after they followed the Biblical teachings on marriage and understood the Biblical facts of how to live together as married couples.

In addition, New Testament Baptist Mobile Bible Institute was established to offer formal in-service Biblical training for untrained rural evangelists, pastors, and church workers and is receiving great increase from the Lord. Currently there are 55 students in the program, and more are expected to be added in the next session.

Join Haley Seboe Cleveland in this study of Titus, "Truth Adorned: Pursuing Life's Deeper Purpose." It will help you renew your purpose and pursue your ...more

An orphanage in Congo hopes to raise enough funds to refurbish its dormitory for the safety of the 146 ...more

Howard Bixby: A Champion for the Church

In an interview with Clare Jewell, Dr. Howard Bixby shares insight from his many years of ministry ...more

For the past five years Tri County Baptist Church has participated in a two-day Scripture assembly ...more