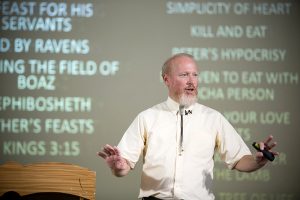 On Thursday morning of the IPFBM All-Partners Conference, Pastor Kirk Wesselink of Desert Hills Baptist Church, Albuquerque, New Mexico, spoke in place of J. D. Enosh, president of the Faith Baptist Church Association in Devanahalli, India. Enosh was to be among the international pastors and laypeople meeting for this conference of the International Partnership of Fundamental Baptist Ministries Monday, Nov. 6 through Friday, Nov. 10, in Tagaytay City, Philippines, but his travel visa had been denied.

In his session, Wesselink surprised the guests with bowls of vanilla ice cream served by the conference center’s kitchen staff. He used the treat as an introduction to the theology of food, or, as he calls it, the doctrine of “edibliology.” Wesselink delivered a two-part survey of significant Biblical events from Genesis to Revelation and the key role that food and feasting played in them. He also talked about Jesus’ instruction from John 21 to “feed [His] sheep” with the pure milk of the Word. 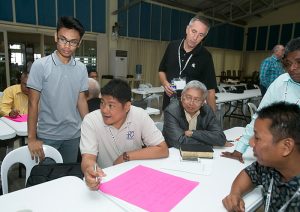 One goal that Chris Hindal, director of GARBC International, had in mind for this conference was for guests to find other IPFBM partners to collaborate with on specific projects for their mutual benefit. Josiah Kennedy, from the Association of Fundamental Baptist Churches of Ghana, discussed a joint project with Philip Fernandez, who oversees a campus ministry in Davao City, Philippines.

Kennedy plans to implement some of Fernandez’s discipleship programs, and Fernandez invited Kennedy to speak at the Renoun Conference in August 2018. “One thing I learned from [Fernandez’s] discipleship program is that he starts immediately after a person gets saved,” Kennedy says. “Another program focused on assurance of salvation, and to me that was fantastic. He has a lot of programs that I am going to go through and try.”

Another collaborative effort is a pulpit exchange between H. C. Stephen of the New Testament Baptist Churches Association of India and Hoi Cung Tum of the Chin Baptist Convention in Hakha, Myanmar. “I can go to speak in his Bible conference and he can come speak in mine,” H. C. Stephen says.

H. C. Stephen says the advantage of inviting an outside speaker is that the person can speak to an organization about necessary issues that someone from within that organization might be uncomfortable to address. Stephen says, “It might not be a big issue, but it might be something that if they tried to say themselves it becomes too interpersonal, and people may overreact. But if I go in, I say what I need to say, nail it, and say bye-bye.”

Stephen also plans to partner with Filipino pastor Ariel Abadiano, who will present the Good Soil evangelistic ministry in Stephen’s church. Abadiano will also bring with him a scientist who can help local pastors reach their people through better agricultural practices. “We are raising crops for the children, and [the scientist] has developed a very cost effective fertilizer substitute that we can share with the community,” Stephen said. “Ariel can bring this man to help us.”

Following the final message by Hoi Cung Tum­, Chris Hindal thanked his wife, Deb; all the speakers; the media team; the conference center staff; and Pastor Maymon Sarnicula for helping him organize and run the conference. The evening concluded with two songs sung by the choir from Bethel Fundamental Baptist Church in Dasmanias City, where the Hindals ministered the previous Sunday.

Walking away from a good church service leaves an undeniable impression on our hearts—that God has been at the center, that we have been filled ...more

Flooding and another wave of COVID-19 are complicating life in Myanmar, where civil unrest has been ...more

Paul Golden is one busy guy. In addition to his administrative role at Clarks Summit University, Paul serves as a chaplain for not one but ...more