In Togo, the Association of Biblical Baptist Churches planted two churches in January and February. 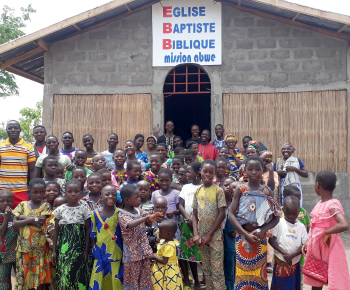 In Togo, the Association of Biblical Baptist Churches planted two churches in January and February—one in Kati-Lomnava, where the association had recently drilled a well and built a water tower for clean drinking water, and one in Edokope.

People living in both villages are mainly farmers, but in Edokope, a small village in the jungle, people practice voodoo and witchcraft.

Joseph Akakpo, who ministers with the Association of Biblical Baptist Churches of Togo, led an outdoor evangelistic meeting in Edokope, and about 30 adults and children professed Christ as Savior.

Although Joseph has established a church in Edokope with these believers, they don’t yet have a building where they can meet for church services. “We have some money put aside but not enough to start building them a place to worship,” Joseph says. And like the people in Kati-Lomnava, those in Edokope also need drinking water.

Togbe Edo, the chief of Edokope, has given the association land to build a church and to drill a well.

“Glory be to God for the chief’s generosity,” Joseph says. “The villagers are also willing to provide sand for the building and meals for the workers; we will then provide the iron sheets, cement, lumber, drilled well with solar panel, etc.,” Joseph says. He is praying that God will provide $12,000 for the well, water tower, and building materials.

On April 17 both churches will baptize at least 15 believers in the Zio River, where people regularly gather to do their laundry. And at both churches, “children and teenagers are still coming in numbers,” Joseph says. In Kati-Lomnava, “two Sunday School classrooms are under construction for the kids before the rain starts.” On April 9 Joseph’s son Joshua will arrive from the Maritime region of Togo with his ministry team, “The Living Hope,” to lead an evangelistic program for children and teens. Joseph is expecting about 200 children and teens to attend.