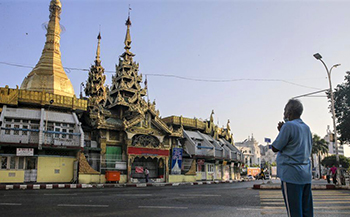 Last week a leader in Myanmar who partners with Regular Baptist International asked for prayer after the military’s takeover of the Myanmar government. As the situation continues, another ministry leader, Victor Vula, asks for prayer as well. Victor is director and principal of Victory International School in Myanmar and leads Victory Community Chapel, which started in July 2017. He sends the following letter.

Myanmar, located between India and China, has been experiencing yet another military dictatorship since February 1.

We experienced military dictatorships two times in the past under General Nee Win (1962–1988) and under General Than Shwe (1988–2010). A small light of democracy was sparked from 2010 to 2014 under President Thein Sein (military supported party) and a bigger light of democracy under the leadership of Aung San Suu Kyi and her party, the National League for Democracy (2015–2020).

The NLD won a second term at the November 2020 election with a landslide victory. But the sad story started over again as we returned to military dictatorship under General Min Aung Hlaing on February 1.

I personally experience the hardship of living under military dictatorship as a minor ethnic group from Chin state and a Christian. (Fifty million people live in this golden country, and 116 different languages are spoken. Christians total 8 percent, and Buddhists 80 percent.) I am living now in Yangon city as a servant of the Lord to help young children through education programs as a method of investing in the lives of young people and opening doors to share the truth of the Bible.

I really don’t want our children and all children in Myanmar to experience the same hardship of living under military dictatorship again and return to the same system of controlling people like North Korea. There will be setbacks in education, economics, freedom of religion, the healthcare system, etc.

Knowing the consequences of the military coup, people across Myanmar are protesting with the Civil Disobedience Movement. Most of the government employees are participating in this movement. 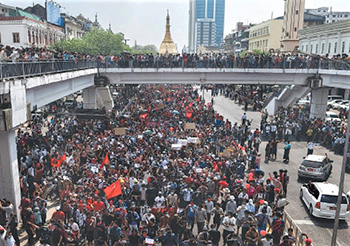 •  Pray that this difficult experience will bring Christians closer to the Lord and seek His face.

•  Pray that the Civil Disobedience Movement will bear good results: (1) to respect the votes of the people; (2) to immediately release the detained political leaders (over 190 now), including Aung San Suu Kyi and President Win Myint; (3) for the military coup to step down and return the government to the elected party, the NLD.

•  If the military dictatorship continues, a few things I mentioned above will be in place. Issues with communications are already starting: some mobile phones are not working, Facebook is shut down,  internet connection is slow, a cyber restriction law is ready to be in place. Even our school will be in jeopardy.

•  Pray that people will be protected by God from COVID-19. There is a possibility that these big gatherings will result in the increase of new cases.

•  Pray that all the UN members will agree to put more pressure on Myanmar military leaders to step down.

•  Pray not only that the military coup will step down, but also that the 2008 Nargis constitution will be changed. The current military-designed constitution blocks Myanmar from full democracy.

•  Pray that all people in Myanmar will continue to fight unitedly for full democracy.

Next post Unrest Continues in Myanmar After Military Coup

The King Eternal guides women to learn 10 attributes of God and understand how these characteristics affect their everyday lives as well as where and ...more

Churches should have clear communication strategies to share information with not only those already in the church but those outside the church as ...more