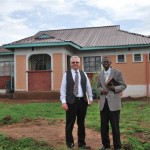 culminated with a dedication service on Sunday, April 22, with Chris and Deb Hindal participating as guests. After David Osoyi, president of the Independent Faith Baptist Churches of Kenya, an IPFBM partner, opened the service in prayer and singing, Chris brought the morning message on the greatness of God, taken from Isaiah 40.

The three-hour meeting included many introductions, testimonies, greetings, and a reading of the history of the 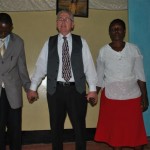 orphanage project. Chris joined hands with David and Esther Osoyi, founder of the project and parents to the children, and led in the dedicatory prayer marking the formal opening of the home. At the conclusion of the worship time, all the guests were invited 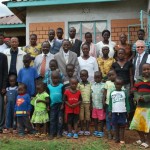 to tour the home and join for lunch.

In 2004 David and Esther Osoyi took in their first orphan, a sick child whom they nursed back to health. The child was later taken away from them, placed with her extended family, and later died. This incident, along with David’s background as a struggling child in a polygamist home, motivated the Osoyis to start the orphanage project by taking in other children. Esther is a nurse, which suits her well to assist these kids.

This orphanage first started in Migori in Southwest Kenya. Later, due to opposition from several fronts, the Osoyis migrated to an area near a couple of his brothers outside of Kisumu, 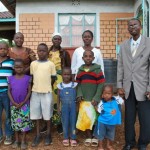 Kenya. From time to time the number of children varies. Currently they have seven in the home and have had to place nine more with other families dictated by a government agency 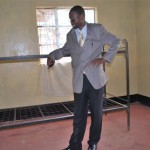 saying they had a lack of beds and mattresses. The Osoyis are praying they can soon bring these nine back into the home, where they will receive both physical and spiritual care.

They would also like to start a poultry business, which could help sustain the orphans without outside subsidies. Donate online, or send a check to GARBC International Ministries, 1300 Meacham Rd., Schaumburg, IL 60173. Type “Kenya Orphanage” in the online Comments/Designations box, or write “Kenya Orphanage” on the check’s memo line.

Ghana Church Thankful to Meet in Own Building

Crossroads Baptist Church in Ghana is celebrating one year of meeting in its own ...more

Why Churches Should Care Deeply about the SCOTUS Abortion Case

Biblical churches speak out on issues like abortion because of our submission to the authority of Scripture. When we submit to Scripture, we submit to ...more