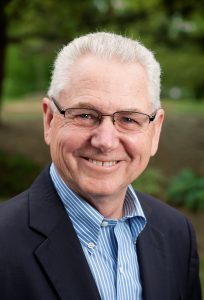 He came to the position of director of Regular Baptist International in April 2006 after serving Christ for 35 years in the pastorate. He and his wife, Deb, planted a church in Mountain Top, Pa., as an outreach of First Baptist Church, Kingston, Pa. He pastored Mountain Top Baptist Church for more than 12 years before being called to pastor Slater Baptist Church, Slater, Iowa. He served the Lord in that church for close to 10 years. In 1994 Pastor Hindal accepted the call to Daniels Road Baptist Church, Fort Myers, Fla., where he served for almost 12 years.

Chris met Deb at Baptist Bible College. She was raised as a pastor’s daughter in New York and Pennsylvania. Chris and Deb have three daughters and a son, all married and either active in vocational Christian ministry or serving the Lord in their local church. Their oldest daughter, Jodi, is married to Jeff Demerly.  Jeff is Executive Director of a ministry over Europe, North Africa and the Middle East and they are  living in Mechanicsburg, PA.  Their second daughter, Lori, is married to Bob King, COO of Mission of Hope Haiti, located in Austin, TX. Their third daughter, Becki Scouten (also working full-time for Mission of Hope Haiti) and her husband, Adam, minister in their church located in Austin, TX.  The Hindals’ son, Andrew, is a Marine who served one tour of duty in Iraq. He and his wife, Trish, minister in their local church in the Indianapolis area. The Hindals have thirteen grandchildren.

Throughout his years of ministry, Chris has had a heart for missions. Each church he pastored has been a sending church for missionaries. He and Deb have had the opportunity to lead several missions trips, including extensive travel, preaching, and teaching throughout Europe, Africa, and Asia. He has twice led tours to Israel. Chris previously served on the board of the Fellowship of Baptists for Home Missions, the board of TechMin and the advisory board for ABWE.

The entirety of Chris’s ministry has been in GARBC churches. He served on the state councils of all three states where he pastored, and he served several terms on the Council of Eighteen for the GARBC. Chris and Deb reside in Austin, TX.