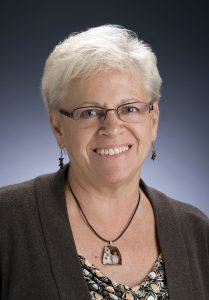 Deb Hindal came to know Jesus Christ as her personal Savior as a four-year-old in her parents’ living room after an evening church service with special speaker, Pastor Carl Smith.  She was raised as a pastor’s daughter in New York and Pennsylvania. Deb is a graduate of Baptist Bible College (now known as Clarks Summit University), Clarks Summit, Pa.

Deb met Chris at BBC and they married in 1970. Chris and Deb have three daughters and a son, all married and active either in vocational Christian ministry or in their local church . Their oldest daughter, Jodi, is married to Jeff Demerly. Jeff is Executive Director of a ministry over Europe, North Africa and the Middle East and they are living in Mechanicsburg, PA.  Their second daughter, Lori, is married to Bob King, COO of Mission of Hope Haiti, located in Austin, TX. Their third daughter, Becki Scouten (also working full-time for Mission of Hope Haiti) and her husband, Adam, minister in their church located in Austin, TX.  The Hindals’ son, Andrew, is a Marine who served one tour of duty in Iraq. He and his wife, Trish, minister in their local church in the Indianapolis area. The Hindals have thirteen grandchildren.

Deb enjoys the ministry of the Regular Baptist International as she interacts with people from all over the world. She often travels with Chris and speaks to the women at various conferences. Chris and Deb reside in Austin, TX.