The first biennial IPFBM conference convened in Bangkok, Thailand on November 4-7, 2009. One hundred fifty messengers representing twenty-two partnering associations from ten countries converged to begin the strategic work of partnering corroboration as they explored the meaning and risks of partnering. Ten major messages focused on the theme, Implementing Partnerships to Fulfill the Biblical Mission.

The Wangree Resort graciously accommodated the conferees in a beautiful setting, punctuated by tropical flowers and the usual Thai hospitality. As the busses rolled in from the airport the various association leaders and pastors stepped into the reception line of Bible school students, who draped them with a lei of purple orchids. A buzz of excitement filled the registration lobby as email names were matched with faces for the first time. The interaction of this multiethnic gathering portrayed a glimpse of the heavenly reunion of God’s people. Everyone seemed pleased with their rooms as they settled in and their anticipation grew as they perused the 35 page program they received at registration.

Chris Hindal opened the first session by identifying four purposes to be achieved through the historic meeting.
1. To develop relationships
2. To gain a better understanding of how a partnership works
3. To transition away from the GARBC being the organizing partner to an international administrative council
4. To begin the creative process directed by the Lord in developing strategies and projects that will help in the global spread of the Gospel

John Greening first stepped up to the plate and hit a home run as he laid a foundation for partnering from the imagery in Ecclesiastes. He depicted the benefits of having others in your life by contrasting the strength of a multi-stranded rope with that of a single strand. Being a maverick that goes it alone contributes to prideful underachievement. Working with others requires humble cooperation and leads to expanded results. Each subsequent message contributed to the widening understanding of global partnerships for Great Commission work. International speakers brought new insights to the dynamic interplay of partnering.

Workshop sessions produced interaction as the groups wrestled with ministry issues that have common denominators across cultural lines. Eyes were opened as each realized the overlap of challenges regardless of the geographical setting. Lists of ministry similarities become the talking points as future strategy discussions are planned. 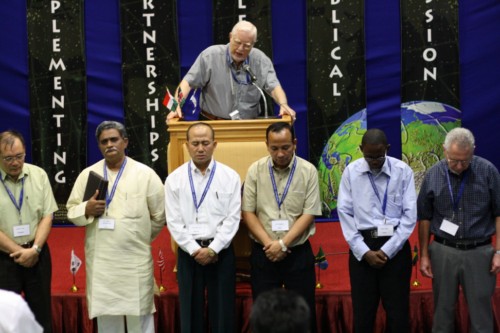 The business meeting on Friday morning opened with a review of the IPFBM history. The initial efforts of the GARBC to form an international partnership were not with the idea of leading the organization. The GARBC functioned as the organizing partner but the time had come for the partnership to form an international council to govern its activities. A plan was adopted whereby a Council of Eight will be elected at each biennial conference. The first council was formed with the following eight men elected to serve:
AFRICA
Sam Quapourlee African Fundamental Baptist Mission Liberia
David Osoyi Independent Faith Baptist Churches of Kenya
ASIA
Hoi Cung Tum Chin – Association of Baptist Churches Myanmar/Burma
Arleen Fidel – The Association of Fundamental Baptist Churches of the Philippines
Chatla Devasahayam – Indian Christian Bethel Baptist Gospel Fellowship – India
H. C. Stephen – New Testament Baptist Churches Association – India

This council from four continents will meet through the internet using GoTo meeting. The technology allows an interactive meeting on a global basis.

Dr. Mark Jackson was honored for his role as the first IPFBM consultant and the man God used in the initial stages of development of the partnership. We presented him with a special gift to commemorate his service to the partnership.

One of the positive aspects of the program was the five-minute presentations by the partners. Each had an opportunity to give a report of what God was doing in their corner of the vineyard.

Evaluations were filled out by many of the participants. Interesting that several suggested we add another day or at least a half day to the length of the conference. Many suggestions were given for future workshops. The overwhelming number made comments about the joy of meeting and fellowshipping with others of different countries and cultures and learning of their ministries.

In summary the purposes for the conference set forth at the beginning were accomplished. The potential is beyond our ability to calculate. We have no idea the extent to which God may be pleased to use the synergy of 57 partnering associations exchanging ideas and cooperating together in Great commission work.

Thank you to those who prayed and for those who sponsored partners to attend. We are praying that God will enable this partnership to cut a new path in carrying out His work for His glory.

Check out the photo gallery and audio recordings of the each session from the conference at www.ipfbmconnect.org

"I still firmly believe that the mission and ministry of Regular Baptist Press is vital, and I am praying for God’s sustaining and empowering work ...more

VBS 2023: Welcome to the World of Dinosaurs