Thank you from Typhoon-affected Philippine Pastor

Everyone in the Tanauan, Leyte area, where Pastor Joel Piňa lived, knew about the coming of 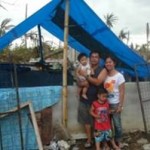 Typhoon Yolanda. News reports said there would be fierce winds and a 10-foot storm surge.

Pastor Joel had been through typhoons before; he wasn’t sure what the weather people meant by a “storm surge,” but he was confident that he and his family would be fine. Unfortunately, this typhoon was going to be worse than any typhoon he had ever seen.

As the storm got worse, Joel and his family decided to move to his in-laws’ larger house nearby. This was wise, and yet even this taller, stronger house was rocked by the storm. This typhoon would include not just some of the strongest wind speeds ever recorded, but also huge amounts of water flooding in from the ocean. After Joel took his four-year-old son, Zen, up to the rafters of the house, he looked around for his wife, Annabelle, only to see her holding their nine-month-old son above her head to keep him from drowning. He quickly grabbed them and pulled them to safety above what became 15-foot floodwaters.  Annabelle’s brother’s family faced a similar situation in the same house. Tragically, the water overcame his wife and child. The boy’s body was found inside the house, but his wife’s body was swept away by the flood and has not yet been found.

Pastor Joel is praising the Lord that most of his extended family did survive, some of them clinging to the roof outside of his in-laws’ house. Even more importantly, in the midst of (or because of) this tragic circumstance, the Lord gave Pastor Joel the opportunity to share the gospel with some of his family and a couple strangers, all of whom made professions of faith in Christ! —by Ariel Ubben

Pastor Joel and his family are now living during the day on top of their tile floor, the only thing in their house that survived the flood. At night, five families crowd into the only house that remains on the property.

We are thankful to those who gave to the Philippine Typhoon Relief project. We have funds to begin to reconstruct Pastor Joel’s house and other houses and churches. Today a missionary contractor arrives. We will visit 10 towns, survey the damage, and list materials that we need to buy for reconstruction. We will likely order materials from Cebu City, for construction materials are in very short supply in our area. —from the prayer letter of Dr. Jim and Allene Latzko, ABWE missionaries in Tacloban

Churches in the Democratic Republic of the Congo can gather again, reports Bertin Mwema, president of the Community of Evangelical Baptist Churches of ...more

Open Mike: What Does It Mean to Be Forward Thinking?

By Mike Hess I write this article on the eve of the NFL draft. It amazes me how popular this event has become. Consider for a ...more

NEWS FROM REGULAR BAPTIST MINISTRIES Mike Hess, GARBC National Representative Let me ask you a challenging question. Does your church have a culture of mentoring and training ...more