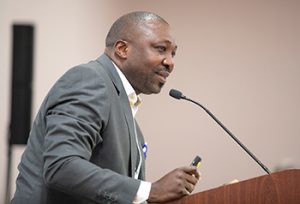 Seventy-five messengers from GARBC churches gathered on Thursday for the  Regular Baptist International Luncheon. RBI director, Chris Hindal, hosted the event, shared a PowerPoint update, and then turned attention to four international guests representing three partnering associations in the International Partnership of Fundamental Baptist Ministries, of which the Regular Baptist Churches is a partner.

While the attendees enjoyed a delicious meal, they listened to the testimonies of these guests. Pastor Jermi Babu, president of Hope New Interior Ministries in South India, shared the challenge of evangelism and church planting in an increasingly hostile society. India’s current administration is set on making India a homeland for only Hindus. Pastor Babu challenged the group to pray for the spread of the gospel in India.

The second testimony came from Pastor Moboko Fidele, from Bibleway Baptist Churches of Congo. This association, representing 14 churches, only recently joined the IPFBM. Pastor Fidele used a PowerPoint presentation to share how he cares for 132 orphans though he has nine children of his own.

Pastor Philemon Gwelikporlusohn and Pastor Samuel Minikollie lead churches in Monrovia, Liberia. They represent the African Fundamental Baptist Mission, also a partnering association. Pastor Philemon used his time to thank GARBC churches for supporting Baptist Mid-Missions missionaries who brought the gospel to Liberia. He mentioned pioneer missionaries Karl Luyben, Chick Watkins, and Abe Guenter, saying, “We stand before you as the fruit of their labors. The missionaries worked hard and stood firm. When the civil war broke out and all the missionaries had to pull out, they left us Jesus,” he says. His testimony “was a moving expression of grateful hearts,” says Hindal.

Pastor Kirk Wesselink from Desert Hills Baptist Church in Albuquerque was the last to speak. He shared about his church’s support of Regular Baptist International. Though a small congregation, it gave over $5,000 to rebuild a church in Bigogwe, Rwanda, which opened again two weeks ago. Desert Hills Baptist also paid the fees that helped the pastor complete his education.

While attending the IPFBM’s All-Partners Conference in the Philippines, Pastor Wesselink learned of the building program of Bethel Baptist Church, led by Filipino Pastor Maymon Sarnicula. Desert Hills Baptist took its own building fund, which was sitting in a bank, and loaned Bethel $30,000 interest free to complete its building construction.

“America-based local churches can do a lot with small amounts when they are willing to generously be used of God to impact the world,” says Hindal.