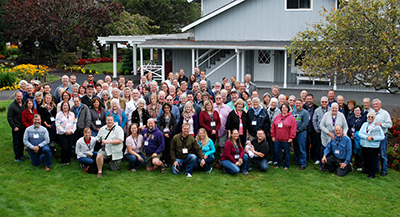 Couples in ministry at Baptist Network Northwest churches gathered for an annual retreat in the beautiful seaside town of Cannon Beach, Oregon, Sept. 14–17.

The retreat marked the 75th anniversary of BNN and its mission agency, Northwest Baptist Home Mission. A special joy was having 94-year-old Carl Hills, a former NBHM director, in attendance. A reception also recognized Dave Thompson, NBHM business manager, for 16 years of service. He will soon move to part-time status but will remain in his position until the BNN Council finds his replacement.

Several of the pastors were open with Chris about their complacency with the GARBC, citing the fellowship’s action several years back of distancing itself from Cedarville University and the issue of secondary separation. While a few of the churches pulled out of the GARBC around that time, most remained in but have not actively participated. Chris says, “I was very warmly received by the group. They are a great group of pastors and they were encouraged that I spent some time with them. From the pulpit I heard exhortation to remain connected to the GARBC.”

Listen to conference recordings at baptistnetworknw.org.

Next post Do You Experience Persecution in Your Workplace?