The Ukrainian immigrants who belong to a church in Illinois are being salt and light in their adoptive country. 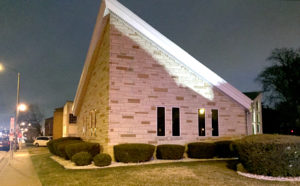 Pastor Alexander Kalinin arrived in the United States in 1991, two months before the collapse of the Soviet Union. When the pastor of Ukrainian Baptist Church in the Chicago suburb of Berwyn retired, the church called Kalinin as pastor. Twenty-seven years later, he continues to shepherd this flock.

While much of the service is conducted in Ukrainian and English, Pastor Alexander preaches in Ukrainian. Chris Hindal presented Regular Baptist International, of which he is director, on Sunday evening, April 15. It was a snowy night in Chicago, but a good group attended.

The service opened with congregational singing in Ukrainian followed by English. The men’s choir sang, Scriptures was read, and Chris preached with a translator and showed the international partnership on PowerPoint. This church’s ministry through missions emphasizes its home country of Ukraine; however, several people expressed appreciation for Chris’s overview of God’s global work through the international partnership. The church shared a generous gift for the ministry. Praise God for a church of immigrants who are being salt and light in their adoptive country.

"I determined to write a devotional biography. In no sense is this volume a critical analysis of the man’s theology or his actions. . . ...more

5 Ways to Encourage Others during the Holiday Season

From Thanksgiving to Christmas, we followers of Christ can display what these exclusively Christian holidays truly mean. ...more