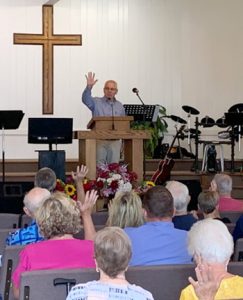 Lakeport, California, two and a half hours north of San Francisco, is situated on the western shore of the largest freshwater lake in California. It is the county seat of Lake County and has a population of 5,500. Clearlake Baptist Church dates back to 1955 and for the last 13 years has been led by Pastor Ray Smith. Prior to his ministry at Clearlake, Pastor Ray and his wife, Lori, served four years in Australia with ABWE. The Smiths’ son Brent and his wife, Jessica, began their ministry at Clearlake Baptist a year ago as associate pastor with an emphasis on youth and music.

On Sunday, Aug. 18, Chris Hindal shared with the congregation both aspects of Regular Baptist International, of which he director. During Sunday School he shared some of the history of Regular Baptist Press International and via PowerPoint introduced the congregation to many ministries around the world that are being impacted by Regular Baptist Press Sunday School and Vacation Bible School curriculum. Chris preached in the morning service, challenging the congregation to be personally involved in the Great Commission right where they live. He showed them how the Great Commission assignment is being fulfilled by partnering associations around the world.

Many people expressed their thanks and said they were encouraged by the evident power of the gospel around the globe.