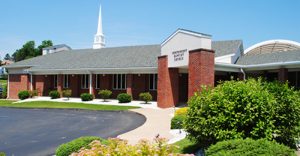 Though Chris Hindal witnessed a fatal motorcycle crash along the way to Towanda, Pennsylvania, he arrived safely and in good time at Independent Baptist Church for the Sunday evening service on Oct. 12.

Chris, director of Regular Baptist International, and Pastor Donn Hauser reminisced about Pastor Donn’s time in Alaska, where they first met. Pastor Donn and his wife, Lynn, planted a church in Big Lake, Alaska, in the late 1980s. Independent Baptist Church had been their sending church, and in 1993 the church asked the Hausers to return and Donn to become the senior pastor. He followed his father’s lengthy pastorate at the same church.

By God’s grace, Independent Baptist Church continues to grow. The church is in the midst of a building expansion program to provide more educational space. Chris presented the Regular Baptist International, and the church generously responded with an offering. For many years Independent Baptist Church has supported Regular Baptist Press International.