Chris Hindal is currently on a ministry trip in Myanmar. Gaining an understanding of cultural challenges has been valuable, he says. 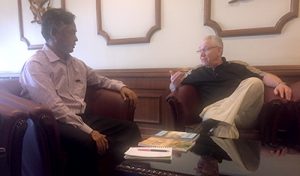 Every trip to Asia is long. After 27 hours of traveling—with my route taking me through San Francisco and Beijing—I arrived in Yangon, the former capital of Myanmar, late Friday night, March 24.

The value in the first few days of this journey has been an increased understanding of the cultural challenges of evangelism and church planting. E-mail correspondence is helpful, but until a person has an in-depth conversation with someone face-to-face, that person cannot appreciate ethnic diversity and how it affects the spread of the gospel.

By Wednesday, I had interviewed seven ministry leaders individually, discussing the strengths and weaknesses of the International Partnership of Fundamental Baptist Ministries. While gospel penetration is difficult in Myanmar, an 88 percent Buddhist country, the men there are passionate about reaching their own people and establishing churches.

One man told me that after his children leave for school, he and his wife spend their mornings sharing the gospel on the streets. In the evenings he writes. This man, who holds a PhD, showed me his latest book on the sufficiency and finality of Revelation. His concern is that Pentecostals and liberals are influencing the Chin people with wrong doctrine.

I have discovered that many Christian families do not even own Bibles because of their poverty. That is a need we can help with. A Bible in the Chin language costs about seven dollars. Don’t sit on the sidelines; get in the game. Your contributions to Regular Baptist International are an investment in eternity.