Chris and Deb Hindal attended the annual meeting of Fellowship of Missions. The meeting marked the agency's 50th anniversary. 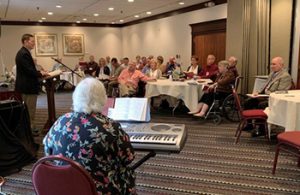 Fellowship of Missions is a coalition of conservative independent like-minded mission agencies. Celebrating FOM’s 50th anniversary, representatives from most of the 18 member agencies gathered Sept. 16–18 in Huron, Ohio, for encouragement and to look back on the works of God through the years.

Prior to the annual meeting, Chris and Deb Hindal, representing Regular Baptist Press International, attended FOM’s CEO retreat Sept. 14–16, where leaders had the opportunity to relax, enjoy one another’s company, and be spiritually refreshed. Mike Peck, family counselor for Baptist Church Planters, spoke twice to the group on Sunday morning. His warm approach to the Scriptures brought encouragement to personally respond to God with words of affirmation. 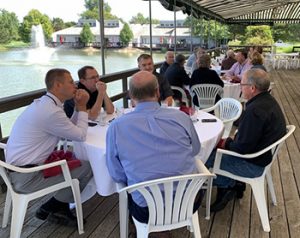 Baptist Church Planters hosted the meetings, choosing the beautiful Sawmill Creek Resort as the venue. The speakers were Gary Anderson, president of Baptist Mid-Missions from 1989 to 2015; Jerry Webber, president of FOM from 1998 to 2006; David Little, president of Baptist Church Planters from 1997 to 2014; and Bill Smallman, administrator for Baptist Mid-Missions from 1980 to 2009 and historian of FOM. The first president of FOM, Henry Heijermans, unable to travel, sent a video. Each shared parts of FOM’s history in the context of the times.

Maynard Belt, president of FOM since 2011, shared recent developments of the ministry, including the welcoming of two new agencies: Evangelical Mission to the Unreached International (Taylors, South Carolina), and Faith Baptist Mission (Winter Haven, Florida). In addition, Dublin Christian Academy reapplied and was reinstated. On the final morning, Chaplain Steve Brown, chairman of the executive committee, outlined the new goals and objectives that FOM has developed as the reset for the future.