Pastor Bob and Diana Ericsson are superbly suited for ministry in Miami. Formerly they ministered in Colombia, where they became fluent in Spanish. They now minister at Ambassador Baptist Church in Miami. Two-thirds of population in Miami speak Spanish, so it makes sense for the church to target the Hispanic people.For a while the church tried to integrate English and Spanish speakers into one congregation that attended unified services. But now the church is trying a new avenue of ministry. Pastor Ericsson says, “Lord willing we will start this fall a Sunday afternoon Spanish-speaking service.” 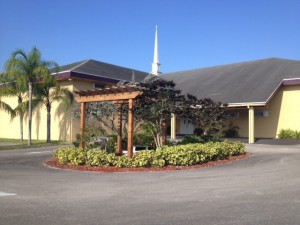 ministered at Ambassador Baptist on Sunday morning, June 8. Chris shared an update on the International Ministries and challenged the congregation from the Word of God. The Ericssons treated the Hindals to a Cuban dinner with a taste of Cuban culture.

God has strategically located this church and pastor to reach a diverse population. All of our churches need to heighten their sensitivity to the demographic makeup of their community.