Chris Hindal, director of GARBC International Ministries, and his wife, Deb, had the pleasure of visiting First Baptist Church on Aug. 10 and sharing ministry news. 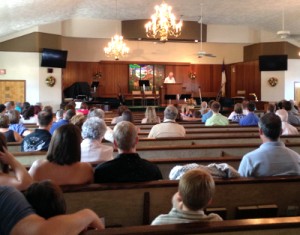 Chris Hindal, director of GARBC International Ministries, and his wife, Deb, had the pleasure of visiting First Baptist Church on Aug. 10 and sharing ministry news.

Rob Mieden has served at First Baptist since 1994, first as youth pastor and then accepting the pastorate in 2004. In recognition of his 20th year in ministry at the church, the congregation threw a surprise party last week to express their appreciation to him and his wife, Sharon.

Andrew Johnson has been youth pastor since 2006. During the morning service, the Hindals heard the youth testify of the blessing of attending Teen Leadership Conference at Baptist Bible College and Seminary, Clarks Summit, Pa. The group also shared with the church a song they had learned at TLC.

Chris shared Gospel Literature Services during the Sunday School hour. Then during the service, he used the church’s two mounted Apple TVs to help the congregation become more aware of what the GARBC is doing through the International Partnership of Fundamental Baptist Ministries. Later that day the Johnsons took the Hindals out to a delicious Chinese restaurant for dinner.