The immigration of thousands of Chin people from Myanmar into several cities of the United States provides an opportunity for local churches to do foreign missions at home. 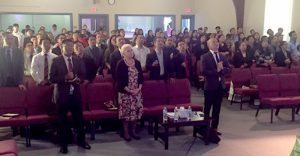 The immigration of thousands of Chin people from Myanmar into several cities of the United States provides an opportunity for local churches to do foreign missions at home.

Twenty thousand Chin make Indianapolis their home. A Chin church in the Greenwood section of Indianapolis held a Bible conference Oct. 20–22 with the Chin Baptist Convention International (which partners with the International Partnership of Fundamental Baptist Ministries). Hoi Cung Tum, president of CBCI, had invited 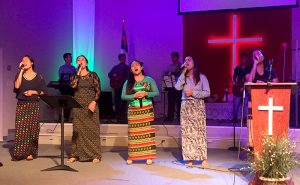 Chris Hindal, director of Regular Baptist International, to be the speaker.

In the evenings, 120 Chin gathered, and twice as many gathered on Sunday, when Chris brought four messages from the book of 2 Timothy. He emphasized both salvation and Christian living.

The entire service was conducted in the Mara Chin language. While many of the Chin speak English, others do not, so Hoi Cung Tum served as the translator for the messages. All of the music was traditional Chin music, and the special music was beautiful.

The Hindals were truly blessed by the hospitality and the responsiveness of the Chin people.

Ghana Church Thankful to Meet in Own Building

Crossroads Baptist Church in Ghana is celebrating one year of meeting in its own ...more

Why Churches Should Care Deeply about the SCOTUS Abortion Case

Biblical churches speak out on issues like abortion because of our submission to the authority of Scripture. When we submit to Scripture, we submit to ...more