Academic training at Shalom Academy in India goes beyond the classroom to the open field in Bible camps and Vacation Bible Schools, says its U.S representative. 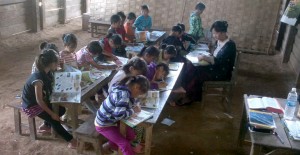 Chong Singsit is the U.S. representative for Shalom Academy Ministries in India, a ministry of the Fundamental Baptist Fellowship of Manipur, India. He sends the following ministry report:

Academic training at Shalom Academy goes beyond the classroom to the open field in Bible camps and Vacation Bible Schools. Students from Shalom get involved in the many VBS’s and Bible camps held in several locations throughout the area. With the aid of our students, over a thousand young people heard the gospel because of VBS. The printing of R50,000 (rupees) worth of VBS materials provided by Gospel Literature Services was printed with donations from the churches and an individual within Manipur and used in the VBS’s held throughout the state. We saw over a hundred young people saved through the various VBS’s conducted.

New church plants are the heart of Shalom Native Mission. Though we have not seen as many churches begun as we would like, we continue to move forward and gain ground in some areas. An existing property was purchased for the newly started Gwaltabi Baptist Church, about 20 miles from the capital city of Imphal. Another land was purchased for a church building on the border town of Moreh between India and Burma. Our team in Moreh from Grace Baptist Church is making an impact among the Buddhist monks there. Traveling evangelist Jamthang also spoke in his December report of the birth of one church in the Southern district of Manipur.

Efforts have been given to reach the Hindu-dominated city of Siliguri in northern India. The Lun Singsit family is in the process of looking for rental property or reasonably priced land in Siliguri for a fellowship they started two years ago. The efforts of Lun and family are paying off with several Bible camps and outreach programs that were launched during the past year. Our prayer is to establish not only these but more gospel preaching churches.