A Christian school in the Liberian village of Mafla has faced hard times but is overcoming the hardships thanks to students' donations to a 2013 Regular Baptist Press Vacation Bible School missions project. 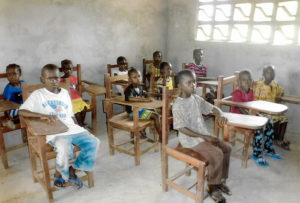 A Christian school in the Liberian village of Mafla has faced hard times but is overcoming the hardships thanks to students’ donations to a 2013 Regular Baptist Press Vacation Bible School missions project.

Three teachers taught the children each day in lean-tos with straw roofs that leaked. But Chris notes that “it was interesting to see the solar system drawn on a faded blackboard in white chalk and hearing the children recite about the planets.”

After the Hindals visited, they initiated a missions project through Regular Baptist Press’s 2013 Vacation Bible School program. Children participating in the program would donate money to construct a permanent facility for the school. The Liberian government had already donated twenty-five acres of land for the school, and a local builder wanted to donate his services to design the facility.

“The VBS money was 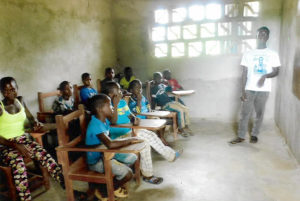 sufficient to build a six-classroom school, but then the Ebola outbreak hit Liberia and the school stood empty,” Chris says.

The school principal’s wife, Nancy, a nurse, died of Ebola. The principal, George, was devastated and moved closer to the area where he and Nancy had been planting a church in Galai.

Now named Hope Village Academy, the school reopened last year, but it had not yet acquired chairs; the children had to sit on the floor. Now the children and teachers are once again grateful for the 2013 VBS project: in December 2017, Regular Baptist International sent the school the remaining funds from that project to build chairs with desks for the children.

Posted in Ministry Highlights, RBP International on May 20, 2018.

Next post Indian Ministry Sends Thanks for Wordless Bracelets