Ministries to students in India have a much-desired addition of musical instruments, thanks to offerings taken by students attending Vacation Bible School in the U.S. 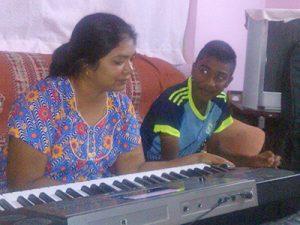 Ministries to students in India have a much-desired addition of musical instruments, thanks to offerings taken by students attending Vacation Bible School in the U.S.

Ruth Nelson Billa of Biblical Baptist Fellowship, Karnataka, India, expressed a need for musical instruments to use in Vacation Bible School. Regular Baptist Press set out to help with its 2015 VBS program, “To the Edge: Encounter the God of the Universe.”

Every year, RBP’s VBS program initiates a missions offering opportunity through Regular Baptist International. In 2015, students’ offerings would go toward sending resources to churches outside the U.S. so they could conduct VBS. The endeavor was called “Operation Kids: Reaching Boys and Girls through VBS.”

When Billa Nelson Babu received a portion of the students’ contributions, she wrote a note of thanks to Regular Baptist International, saying, “Thank you for your helping hand to our ministry and the sacrificial gifts.” The children in her VBS program were waiting a long time to have musical instruments to sing with, she says. “For them it is happiest moment.”

She adds, “Thank the Lord for giving you such a kind heart. You have put all efforts to help our ministry and made it impossible to possible.”

Next post 44 Churches Represented at Annual Meeting in Kenya