In Tamu, Myanmar, Chris Hindal visited a vibrant church that has a heart for teaching Bible doctrine to children. 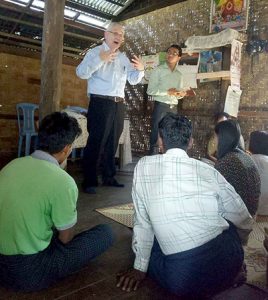 Chris Hindal is currently on a ministry trip in Myanmar. He arrived in Yangon March 24 and spent several days talking with ministry leaders. Read about that portion of his trip in “Chris Hindal Visits Myanmar.” The next leg of his journey has taken him to Tamu, a town in northwest Myanmar close to the Indian border. He writes about his ministry in Tamu in the article below.

I left Yangon, Myanmar, on Friday, March 31, and flew about two hours northwest to Kalaymyo. Nang Za Thawn, pastor of Evangelical Baptist Church, which is affiliated with the Evangelical Baptist Conference, an IPFBM partner, met me and brought me to Tamu, where he lives and ministers. Tamu is a city of about 45,000 people; the majority of people are Buddhists, but a sizable minority claim to be Christians.

I spent the next three nights at Shwe Oakkar Motel, likely one-star lodging but sufficient. Pastor Thawn was a gracious host, and the next three days were memorable.

Thawn’s parents, who had moved to Tamu in 1976, helped a group of people organize Evangelical Baptist Church in 1986. Thawn and his wife grew up attending that church, as well as the same school, and  married at age 22. Thawn graduated from Bible school and became a Bible teacher, and his wife became his student for two years. 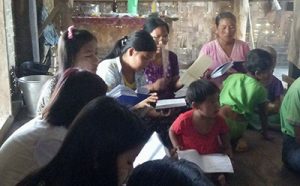 church, which has a nice building, sponsors a preschool, with 69 children enrolled, and a Christian school, with 140 students attending during the summer and 260 during the regular school year.

Thawn and his wife have three sons—and now a daughter. Ten months ago, a baby girl, about 1 week old, was abandoned at the family’s gate. Thawn and his wife adopted her and named her Naomi. In addition, 38 orphaned children live in their home. Their home is a clean, well-organized, and happy place. It is an impressive testimony to the glory of the Lord.

I preached in Thawn’s church on Sunday and in a village church plant on Sunday afternoon. On Monday, I spoke to the student body of Evangelical Baptist Church’s school. Regular Baptist Press International will be sending Thawn’s church Sunday School curriculum, which the church is considering translating into the Tedim language. His church is also interested in Regular Baptist Press’s Vacation Bible School curriculum and will soon begin receiving those materials. In the future, Kids4Truth Clubs materials would also be a good fit for this church, since staff teach Bible doctrine to the children. Thawn has also requested that teams from the states come to his church to lead children’s camps with basic Bible teaching.

What a blessing to visit this vibrant ministry and experience its heart for evangelizing children.